Blog > When Did 3D Modeling Start? A Brief History

When Did 3D Modeling Start? A Brief History

How 3D Modelling has Evolved over the Years

In today’s world, almost all the products that are created anywhere originate from 3D modeling. Every idea is converted into a 3D model first and then analyzed, enhanced, and improved to make it physically available for customers. It is the invisible hand that shapes all our products, yet many consumers are not aware of the tech behind it.

Even though we appreciate the importance of 3D modeling, you may not know the eventful journey 3D modeling has had. In this article, we aim to give you glimpses of 3D modeling’s journey from the humble beginnings to the mammoth industry it has created.

For years, the product development cycle started with technical drawings on sheets of paper. Later, computer-aided design (CAD) softwares allowed designers to move from physical paper to a digital file. At first, this software dealt mostly with 2D shapes like lines, squares, holes, and threads. CAD software eliminated manual errors and introduced a more precise, measurable, and accurate way of creating technical drawings. This, together with the advent of CNC machining services (Computerized Numerical Control), made production increasingly efficient and to continually evolve to this day.

CAD softwares has evolved as well and can now build 3D designs. Today, it’s used to design objects with precise measurements and dimensions. It has applications in product development for numerous industries, including aerospace, automotive, and architecture.

In contrast to CAD software, the designs created by 3D modeling softwares typically do not focus on the dimensions of the model to be made, but instead focus on artistic designs like human faces, animals, or cartoon characters. 3D modeling softwares works in a similar way to the traditional sculpting process where clay can be added or removed.

3D Modeling Through the Decades

Let’s take a closer look at the development of 3D modeling over the years and its applications.

We can trace the origins of 3D modeling to the 1960s. During this time, 3D modeling was a very restrictive domain where only professionals in engineering and automation could access softwares that worked on mathematical models. 3D modeling existed and showed promising signs, but restrictive access to the modeling systems and the cost of equipment kept it under the radar of many scientists and companies. Moreover, the modeling was highly complex and worked only with mathematical models. Not an ideal way for an artist to get involved.

This however changed, thanks to American engineer Ivan Sutherland who in his doctoral thesis project in the early 1960s introduced Sketchpad — one of the first graphical user interfaces.

The revolutionary new program allowed users to visualize and control program functions. It quickly became the base for developing computer graphics, operating systems and their interfaces, and software user interfaces.

Sutherland developed the first primitive version of the Sketchpad application in 1961. This application ran on TX-2, a programmable computer at MIT. After further experimentations, Sutherland published his doctoral thesis, “Sketchpad: A Man-Machine Graphical Communication System,” in 1963.

Following this success, Sutherland along with his colleague David Evans opened the first-ever department of computer technologies at the University of Utah. They recruited numerous bright students to help them develop the software further. One of the students was Edwin Catmull, founder of Pixar Animation Studios.

Eventually, Evans & Sutherland, the first 3D graphics company, was founded in 1968. This paved the way for the democratization of the 3D graphics industry, and every user interface we see today has its origin in Sketchpad.

Sketchpad has contributed greatly to the development of imaging softwares that includes CAD and modeling programs.

The success of Sketchpad gave others impetus to work on computer graphics. By the 1970s, many new companies were established that worked to design better software for user needs. Automated Drafting and Machining (ADAM), an automated design and drafting system, was developed. This software could be used on multiple systems simultaneously, and this helped in the proliferation of the software.

The 1970s is also referred to as the age of rendering, and one of the most powerful images representing this age is the “Utah Teapot” rendered by Martin Newell at the University of Utah.

The 1980s was the decade when 3D modeling became among the most sought-after software. IBM launched its first personal computer in 1981, which led to widespread use of CAD across businesses operating in the aerospace, automotive, and other engineering sectors. The symbiotic relationship between the software companies and their users helped in growing capable softwares that could perform powerful calculations and rapidly create models.

Unigraphics’ UniSolids CAD software is one of the earliest solid modeling software.

1983 saw the launch of AutoCAD, a revolutionary 2D drafting software that was much more ahead of its competition and at a fraction of the cost. During this time IGES became the software neutral file format that could be shared and used on different software platforms for easy transfer of data for users.

Most of what we see today regarding 3D modeling software was developed in the 1990s. During this period of modernization, CAD software was at its peak, with most industries making it the standard practice for designing products. Prices were also constantly falling, making it possible for companies, freelancers, and even hobbyists to gain access to such software.

Adding to this, startups started exploring freemium business models, and free software applications like Blender gained massive acceptance. Such software popularized 3D modeling among users of all levels. Students were now taught and certified in this popular software. It became part of the university-level curriculum, boosting its reach and usage.

Towards the end of the 1990s, software companies also started exploring dedicated applications for a new and emerging manufacturing technology — 3D printing. 3D printing operated under a different set of rules and constraints, so the software needed to be modified to extract the full potential of the technology. This led to the emergence of new softwares that catered to 3D printing.

Since the year 2000, 3D modeling software and CAD software have only evolved for the better. More and more software applications that cater to a wide range of applications, users, and budgets are now available

Today, there is a wide range of software options to choose from. With the development of cloud software, software applications are now moving to a cloud-based system where anyone can access files and accounts from anywhere in the world, and from any system — PC, laptop, desktop, tablet, etc. This trend is set to continue.

There are also formal courses available from public and private players to educate all types of users in the use of the software.

Today, anyone can access CAD or modeling software according to their preferences. These are some of the major industries most impacted by 3D modeling: 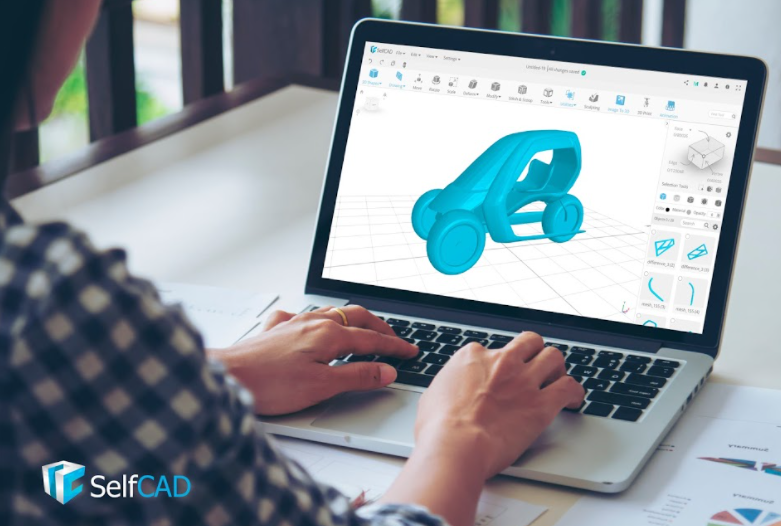 The automotive industry has been using CAD software since its very beginning. Every automobile requires a considerable number of parts. Without modeling software, manufacturing these parts would not only take a significant amount of time but also require a huge amount of effort. Modeling software takes away most of the time and effort and also saves cost. Additionally, since the software can generate dimensionally accurate models, which can be rendered and simulated, designers already know how the part will perform before it is installed in the vehicle.

Similar to the automotive industry, the aerospace industry has also welcomed CAD software with open arms. For aircraft, shuttles, and other aviation products, aerodynamics and weight are critical considerations. Even minor errors in dimensions and calculations can cause the system to fail. CAD software can eliminate all such mistakes and ensure that the designed part performs as per its capabilities.

Since the dawn of computer graphics and the push by Pixar, the animation industry has seen a revolution regarding the use of 3D modeling software. The tedious job of sketching every frame can be avoided as modeling software can simplify the work. It also increases the pace of work and saves huge amounts of overhead. Today’s software can capture reality as it is and can replicate complex human expressions almost perfectly. This is a feat that wasn’t possible a few decades ago.

3D printing is entirely shaped by design software. Every 3D printing process starts with a 3D model, and without a powerful software the technology would be of no use. So, 3D printing owes a lot to modeling software.

The Future of 3D Modeling 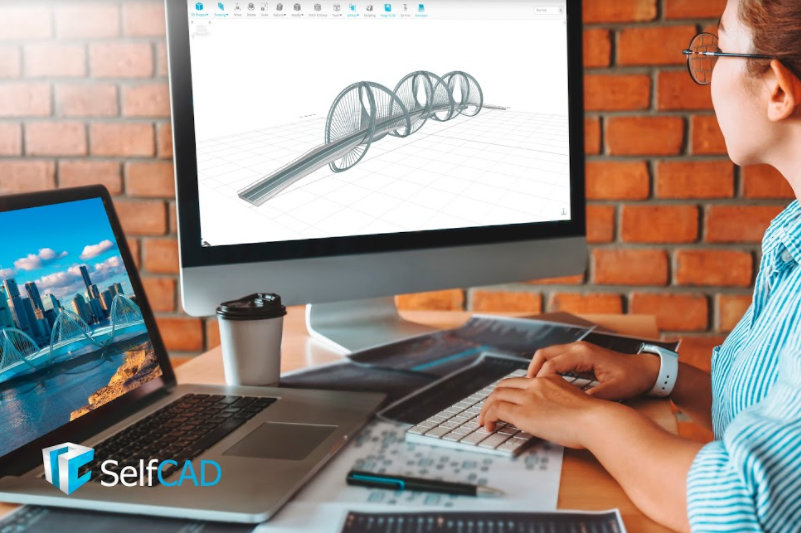 As mentioned earlier, software companies are moving their applications to a cloud-based system. Most companies are still in the transition phase, so we may see more and more cloud-based software that allows easy and seamless communications between global teams. The pandemic has also made this a high-priority task for every company.

With the evolution of multiple new and individual technologies like 3D printing, AI, ML, AR/VR, cloud computing, simulation and big data, we will see more and more integration of Industry 4.0 components.

We are already seeing instances where two or more of the above technologies are being combined to deliver a superior interface and result. For example, generative design software makes use of a software application, which it enhances with powerful machine learning and artificial intelligence algorithms to generate multitudes of design options from the same input constraints.

The integration of AR/VR in designing software allows a designer to wear a VR set and design 3D models in the air. Hackrod, a digital manufacturing company, showcased a designing process that integrated generative design, immersive design in VR, and distributed manufacturing.

Throughout its long history, 3D modeling has become progressively advanced. While it’s impossible to predict exactly how technology and new applications will affect its future, for 3D modeling the future has always been bright.