Blog > The Key Steps to Self Learn 3D Modeling Easily

The Key Steps to Self Learn 3D Modeling Easily

How to Easily Self-Learn 3D Modeling

3D modeling is one of the fastest-growing industries in today’s world. Most businesses and organizations are hiring 3D designers to create 3D models and designs for their company's growth. Having seen the growth of 3D modeling in every field, most students and professionals have started to learn 3D modeling. But they can’t complete a degree in 3D modeling and designing while going through college or doing any other professional work.

So, read the full article to know the best way to learn 3D modeling by yourself.

What is 3D Modeling? After getting an idea, you can then start creating the 3D models using any specialized software. This is the step where you actually create a 3D model of any object. As a beginner, you need to learn a lot of things to create a perfect 3D model. But you don’t have to create a perfect 3D model because this is just a starting point, and perfection will come only after you’ve had a lot of practice. So, don’t focus on perfection, just focus on learning the basics of 3D modeling.

To create a 3D model, the first and most important thing that you will need is a 3D modeling software. There are lots of software available on the internet such as SelfCAD, Blender, Onshape, TinkerCAD, 3D Slash, Fusion 360, and FreeCAD.

SelfCAD is an affordable and beginner-friendly 3D modeling software that can match any skill level. Whether you're a business person, freelancer, or student, you can use this software. It lets you create objects, scenes, and 3D designs in less time than when you’re using traditional CAD software.

SelfCAD is best for beginner 3D designers because its interface is very simple. SelfCAD has been designed in such a way that it has a simplified interface that makes it easier for beginners to navigate. SelfCAD provides users with tools, lessons, courses, and interactive tutorial videos that allow you to easily reproduce even complex designs.

SelfCAD has some of the advanced tools that help you in creating 3D models easily, such as:

You can use all these tools to create 3D models, and by using these tools, you can learn 3D modeling easily and very effectively. Picture of a sphere and light in Blender. Image source: All3DP

Lighting is one of the most important processes in 3D modeling. You can create a perfect 3D model without using the lighting feature. To be proficient in 3D modeling, you should also learn the principles of lighting.

While learning 3D modeling by themselves, most beginners make this mistake. They simply learn the 3D modeling process and don't focus on its other aspects, such as lighting.

Lighting in 3D modeling is where light is simulated in a computer-generated environment. Sometimes after you have finished 3D designing your model, the final product won’t look very good, and that might be because it requires some lighting to be applied before rendering.

By using lighting techniques in any computer-generated scene, you can improve the value of that scene.

Generally, the lighting techniques used by designers are:

Lighting options in SelfCAD are found just below the rendering options. In the material option, there is a drop-down where you can see scene lights as well as world lighting. 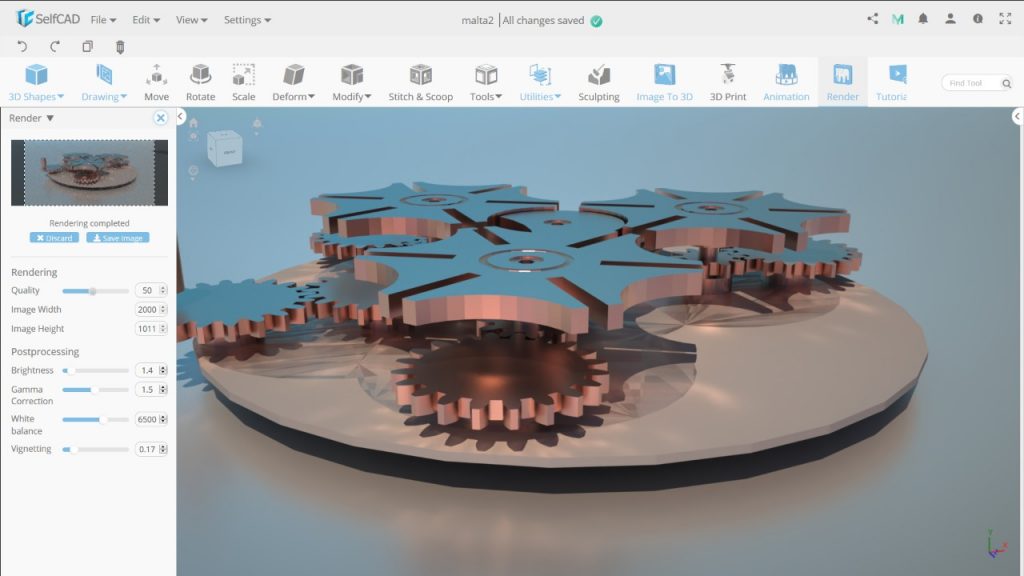 3D rendering is basically the process of converting 3D models into high-definition 2D images on a computer, and tuning the information in it.

3D rendering is a creative process that is similar to photography. In photography, we capture images using a camera but in 3D rendering, you create 3D models using 3D CAD software, and then you render those 3D models.

When using the interactive tutorials, you don’t have to struggle in locating where specific tools of the software are found because you will be directed and shown in every step. You can try them out and be able to create various 3D models much easily even if you don’t have any experience.

You may also watch the tutorials of SelfCAD available on YouTube so that you can understand the interface and features of SelfCAD easily.

Instructables: Instructables is a website specializing in user-created and uploaded do-it-yourself projects. It is a community of people who like to make things. People from different industries publish the articles in the form of instructables on this website. There are many articles related to 3D modeling available on Instructables. You can follow the step-by-step processes on this website to learn how to design a 3D model.

Udemy: Udemy is an online learning and teaching marketplace with over 155000 courses and 40 million students.

Udemy is a marketplace where you can get courses in almost every field. Thousands of 3D modeling courses are available on Udemy. You can buy a course according to your need.

In premium courses, you get information easily as compared to free resources. In free resources, you have to search for different things, and you don’t find all the things you’re looking for at the same place.

So, if you want to learn 3D modeling fast, then you should go with a premium course.

Learning 3D modeling by yourself is not an easy task, but if you use the correct resources and software, then it will become easy for you.

Hope you will learn 3D modeling by yourself by following the instructions provided in this article. If you have any questions or problems, feel free to ask, we will respond quickly.