Blog > How to Position Objects in 3D Space using SelfCAD

How to Position Objects in 3D Space using SelfCAD

How to Easily Position Objects in 3D Space

What is 3d modeling?

The term “3D modeling” refers to the process of creating a three-dimensional representation of an object or surface using specialized software. This representation, called a 3D model, can convey a real-life or new object size, shape, and texture.

The overall process of making an object

What is positioning in 3D?

You place an object in space in the appropriate position using the x, y, z coordinates and the angle of revolution along the axes (in degrees). Anytime you set the position of an object, you do so with reference to a coordinate system. For understanding purposes, one can think of the x, y, z axes as latitudes, longitude, and altitudes. However, the axes are straight on a flat surface unlike the latitudes, longitude, and altitudes, which are on a curved surface.

In 3D space, the smallest area is a point. Each point is defined by a unique set of three numbers, called coordinates. Each point in virtual space is specified by three numbers representing right/left, front/ back, and height components.

The origin of the virtual universe is the intersection of the 3 axes. It's point is (0, 0, 0). As the axes move, the origin will move accordingly.

Origin of an object:

The coordinates you give to an object are aligned with the object’s origin / base point. The origin of most objects by default is the central point of the base of the object, except for a sphere which has its center as its origin. It can change at times, though.

SelfCAD follows the Euler rotation method. The local axes are visible over the object for better understanding. If they are not visible, go to advanced settings and turn them on.

Placement of different parts and alignment:

You can now use the basic mathematics you learned in school to position your parts correctly. You can make use of basic calculations, Pythagoras theorem, properties of different shapes and forms, and basic trigonometry. Spending some time on calculation would help position your objects correctly in place.

Snapping can be used to place objects correctly on other objects or planes. You can make separate parts and then attach them to one other easily using snapping.

Aligning can be used to place objects with reference to other objects or planes. This is really helpful in quickly aligning multiple objects in a specific manner. Go ahead and try it out!

The perspective view will give a realistic view and can be used to understand how it’ll look in the real world. However, isometric will give a geometric and flat view, which can be used for correct geometric construction.

Adding height to a surface perpendicular to it. This will layer the same surface on top of the base as per height input.

This can be used to make a surface/object follow a certain part and to add thickness along with it. You can use this to make an object repeat itself along the path a certain number of times as well. This can also be used to make patterns and reparations along any desired path.

This will revolve the curve around an axis and make an object. This can be used to make radially symmetric objects, as on a potter’s wheel.

This feature lets you directly convert an image to a 3D form. Simple and easy! 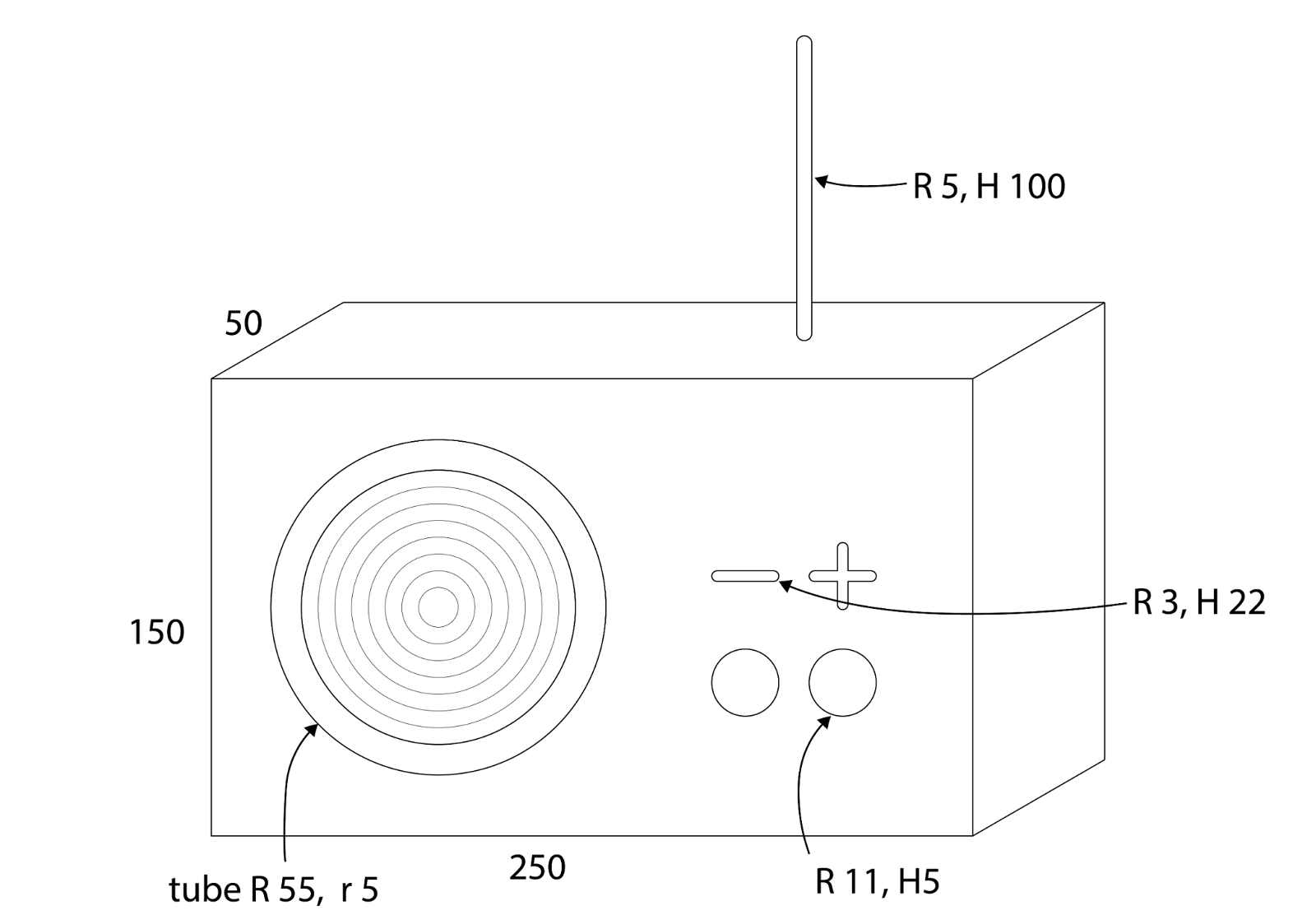 A basic sketch to refer to while making the CAD model. The structure and basic measures are clear. This is just for you to have a rough idea of the proportions and positions. A bit of trial and retrial can be done while making the model.

The positions can be assigned using basic addition and subtraction. If you are not able to position it while placing it, no worries, you can move it around later.

The main body should be made first, so all other parts can be placed on top of it. The other parts will definitely be positioned outside of the cuboid, so the minimum measure will be the box dimension itself. For example: The buttons to be placed on the front side will be 50 units in the positive direction along the front, considering the back is placed at 0 units. Similarly in other directions respectively.

You can try making the model on your own first, or try out the tutorial by following this link: Speaker Tutorial Link

You can refer to the actual pin measurements directly. 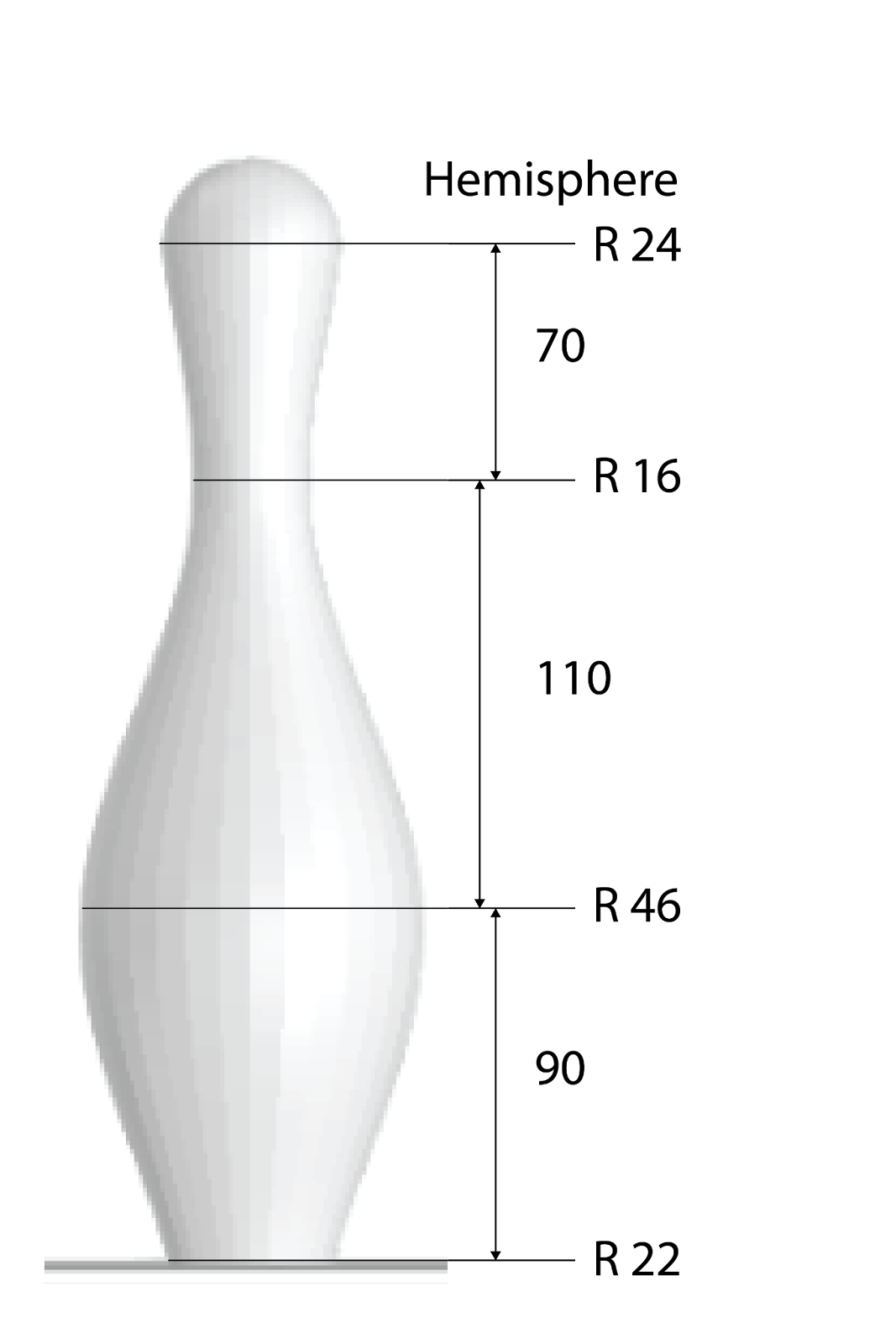 The cross-sectional radius at certain heights is decided. The loft tool can be used to make the model.

To make the circles for the loft, the 3D sketch tool can be used for offsetting the plane as required. The circles at different heights can be made with ease. The bowling pin is quickly made ready because the measurements are available.

Now, you can play around with the placement and arrange them up. Remember the default origin is placed at the center of the bottom of the pin. You can change it in the advanced settings. Note that the area covered by the base itself is 22 units from the origin on all sides, and the maximum radius is 46. The next pin should be placed taking these measurements into consideration. If it is placed 46 units away from the previous, they will just touch each other. Thus, they need to be placed at a distance of more than 46 units.

Making it using the tutorial here.

Check out more done by our designer on the tutorials page.interactive step-by-step tutorials