Are you ready? Let’s kick-off!

3D modeling refers to the creation of a digital representation of any object or surface. A 3D modeler uses 3D modeling software to manipulate points forming a solid. Solids are a collection of vertices that form a 3D model.

3D artists usually begin by generating some primitives like cubes. This primitive is then modified using the various types of 3D modeling tools to form the 3D model. It begins in a simple manner, then it’s transformed and becomes a complex model.

The 3D models created through 3D modeling can be digitally manipulated to suit one’s needs. For example, they can be animated or add some special effects. The models are usually used in a variety of places like in television films, education, gaming industry, architecture, and also engineering.

3D modelers usually specialize in creating digital 3D objects and often do not need to use an advanced rendering engine. This is especially the case when designing for 3D printing, and conversely, many designers specialize in rendering other peoples’ objects and do not do 3D Modeling on their own.

Nowadays, most 3D Modeling applications will also include a rendering engine. However, photo-realistic rendering is a different topic on its own and for the sake of this post, we will focus just on the 3D Modeling and the basic primitive-based rendering parts.

Primitives are the basic building blocks of any 3D object. A vertex is the most basic first-level primitive. A line on the other hand is the second level primitive and the third level primitive is composed of triangles or sometimes rectangles. SVG paths are examples of other types of primitives. Having looked at primitives, we would like now to look at vertices.

These are corners where the edges of an object meet or intersect. Vertices can be used to describe complex scenes. For example, LiDAR and 3D laser scanners can be used to create a set of vertices in a point-cloud manner that is almost similar to pixels in raster graphics.

However, almost all the common 3d modeling software uses different primitives to modify and create 3D models and it’s rare to see someone working on point cloud directly.

3D scanners convert point clouds to solids because most come with in-built conversion software. These solids can be worked on easily by the use of 3D modeling tools.

Most 3D scanners come with software to convert the point

cloud into a solid (a 3d polygon object) that you can work on using standard 3D Modeling software and tools.

3D Modeling programs are used to design 2d shapes like triangles and rectangles. However, the sole purpose of CAD programs is to create 3d

Objects. And because creating polygon solids (nests of triangles) is the standard that is usually used for describing 3d shapes, then now the triangles formed are the

faces of any 3D object.

Shapes like circles are much better when using triangles (called Face3). But most 3D designers usually prefer using rectangles instead (face4). This is mostly when editing 3D polygon shapes.

Some CAD tools like SelfCAD have helped to accommodate 3d designers, while at the same time still supporting other standard 3d files. This is mostly because its editor supports both faces. Though when exporting, all face-4 faces are converted to triangles.

What is a Polygon?

Self Intersecting polygons are the polygons that are invalid. For one to create a valid polygon one should start from a vertex and trace around the entire polygon until you come to where you started without jumping or missing any vertex. To fix this type of polygon, some of the edges need to be removed.

In the above illustration, a rectangle is drawn, then followed by a circle drawn from the center of the top section. This technique is common to most designers who create complex polygons as one just needs to trim extra sections easily. The face mode tool of SelfCAD is great when it comes to selecting complete edges and sections and then deleting them.

It’s possible for one to draw single or multiple lines without necessarily creating a shape. However, when a shape is created through lines, all the outer lines of the shape will not be referred to us as the edge.

Arcs extend and include more than two primitives (splines and circles) are a very important part of 3D Modeling. Normally, one can use just three vertices to create an arc though some meant for modification purposes can have even four vertices. The additional vertex is used for deforming the arc.

In our article on the fundamentals of computer graphics, we learn that SVG incorporates arcs, circles, and even splines and this places a vital role in speeding up the development process. When creating arcs in 3D modeling programs, one usually has the capability to set the amount of segments in the arc as shown below.

‘Segments’, in a technical approach, means to divide figures into separate sections or parts.

The amount of lines and edges in the arcs is the same as the number of segments. The more the number of lines/edges/segments, the smoother the arc. When there is only one segment, the arc becomes a line, and when more lines are added and positioned in the circular function of the arc, a more rounded object is formed. 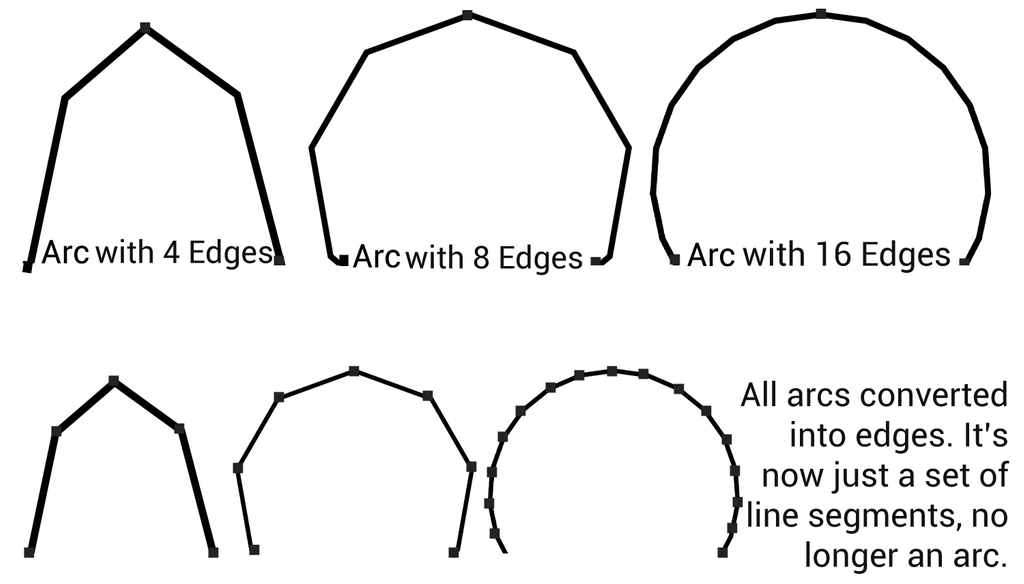 The above illustration is helpful to designers as it helps them design much easier. But when one wants to create the above similar drawing in SVG, one will need to create them manually by the use of lines and line segments, unlike when using a 3D modeling software

Arcs and Splines in 3D

Though polygons can be created using splines, circles, and arcs, usually aren’t polygons until they are converted into lines. To do this easily, you can use the round objects, resolution, or simplification tools of SelfCAD as they convert them into lines without one taking a lot of time.

Sketching is defined as the act of drawing, and drawing itself is what we call profiles. Both sketching and profiles are all used on a shape that has no fill. A good example of profiles and sketches is related is where a designer makes an outer sketch of the profile of a 3D object. We call this sketching of a profile.

The 3D sketching tools of SelfCAD allow one to create any sketch. The output of the sketch is called a profile or a sketch.

In Solid mode, one doesn’t see the edges, rather, only the infill. Solid mode is helpful when one only wants to see how smooth the object is.

In wireframe mode, all the edges are seen and it’s helpful when one wants to inspect the inner sections of the object. It’s mostly used in surface modeling techniques.

In wireframe mode, there is also what we call wireframe plus edges mode. In this mode, the entire object is visualized and it’s much helpful when one wants to see the topology structure of a model clearly.

What is a path

A path in 3D modeling is basically a loop of lines. You need to know that every polygon or face is a path but not vice versa. A path can also use primitives like splines and arcs and it’s not really limited to lines only.

There is always a single drawing surface called a plane in 2D graphics. But in 3D, the editor usually emulates the real world and one can create many planes in a CAD program. A scene is a compilation of all the 3D and 2d objects and planes. It usually acts as the virtual universe. Something else worth noting is that 2D scenes and 3D objects are usually limited to only one plane, but 3D scenes and 3D objects can have many planes.

The difference between a surface and a plane is that a surface can be in 3D while a plane can be in 2D. Also, a plan isn’t limited to the types of drawings that are on it and a surface usually needs to be connected.

Some 3D modeling applications usually limit a person to some extent when it comes to drawing. However, with the Freehand drawing tools of SelfCAD one can create as many planes as possible though you can’t connect them in a single drawing as they are only limited to plane drawings. The drawing tools of SelfCAD are great when it comes to tracing around images when creating complex patterns.

SelfCAD also has great 3d sketching tools. You can freely draw planes and connections as well as drawing on 2D and 3D geometries.

When the sketching tools are used together with the revolve, loft, and the follow path tools it makes it easier for designers and other professionals when creating intricate objects accurately and quickly.

Most of the available 3D modeling applications are usually complicated because creating and editing primitives and topology is a challenge. Most of them create different interfaces for working with profiles, edges, and faces.

But SelfCAD has an intuitive contextual workflow that can edit primitives and topologies through the use of a user-friendly interface that is simple and easy to use.