Blog 10 Most Exciting 3D Printed Houses in the World

10 Most Exciting 3D Printed Houses in the World

Over the years, 3D printing in architecture has been on the rise because of many factors. One of the main factors contributing to the success of 3D printing is the availability of cheaper 3D printers. Currently, it’s possible to get a good 3D printer at a cheaper price. The availability of easy-to-use 3D modeling software like SelfCAD is another factor. Anyone, regardless of their experience in 3D modeling, can easily learn 3D modeling and be able to create professional designs.

Thanks to this, we have seen extraordinary homes emerging all over the world that was designed using 3D modeling software. As the technology advanced, it transitioned from a curiosity to a practical building tool, with firms worldwide creating and selling 3D printed structures.

Here is a list of the ten most exciting 3D-printed homes. 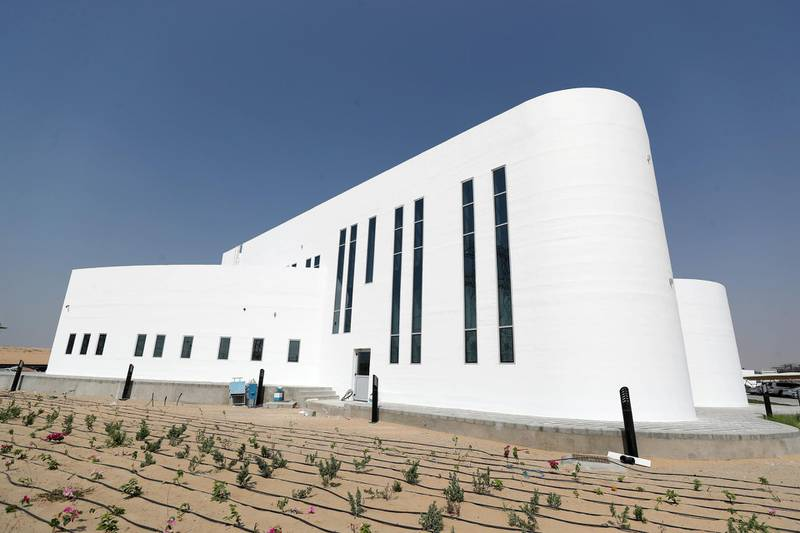 Dubai has been at the forefront of breaking the glass ceiling when it comes to innovative and groundbreaking architectural ingenuity. So it comes as no surprise that they embarked and successfully built the first two-story 3D printed building. The Dubai Municipality and Russian 3D printed home firm Apis Cor collaborated on this administrative building, consisting of two stories of exquisite 3D printed architecture.

Apis Cor created a gypsum-based material for the 3D printer acquired from a local manufacturer to cut costs and simplify the whole process. The printing was done in the open to prove that the technology could withstand a hostile environment with no control over the humidity or temperature. The successful compilation of the Warsan building opened new possibilities in 3D printing, proving that more intricate designs can be achieved. 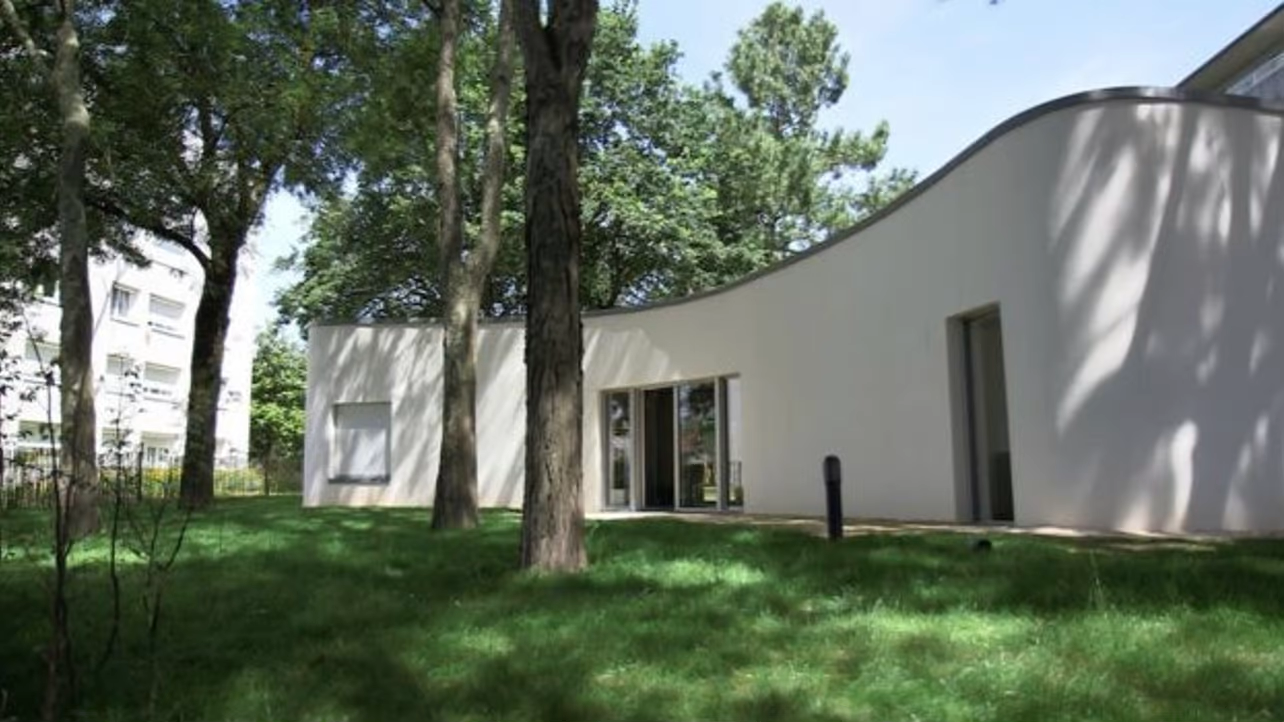 In 2018, the Ramdani family became the first inhabitants of a 3D-printed four-bedroom house in Nantes, France. The home is part of the Yhnova social housing project, which seeks to provide cheap, flexible, and energy-efficient housing on a timely and cost-effective basis. The University of Nantes partly championed this project because they are responsible for the 3D printing technology (Batiprint3D) used to construct the houses.

Batiprint3D is a sophisticated method that involves utilizing a polyarticulated industrial robot to deposit three layers of materials: two layers of expanding foam serve as formwork for the third layer of concrete. The foam is retained after the walls are built in order to insulate the house without thermal bridging. The mobile robot exits from an aperture created to fit the joineries after the operation. 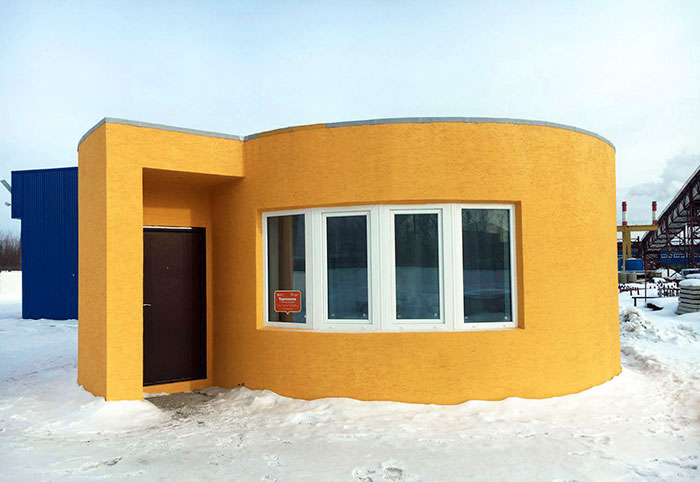 Apis Cor designed and built the 400 square foot house in Russia. The company specializes in 3D printing, and with the help of their mobile construction 3D printer, they were able to create an entire home in just 24 hours. The Apis Cor solution is cutting-edge, with a 3D mobile printer, automated mixing, pump system, and mobile silo integrated into the printer.

The key advantage of having a mobile 3D printer is that a whole house can be created on-site without much effort, and still be cost-effective. Although the Apis Cor 3D printer is almost entirely automated, it still requires two people to operate it and provide the material. It takes about 30 minutes to set up this building 3D printer. But the best part is that the Apis Cor 3D printer can be mounted on nearly any surface with a variation in elevation of less than 10 cm owing to its stabilizing mechanism. Other home 3D printers need a leveled and smooth concrete foundation. 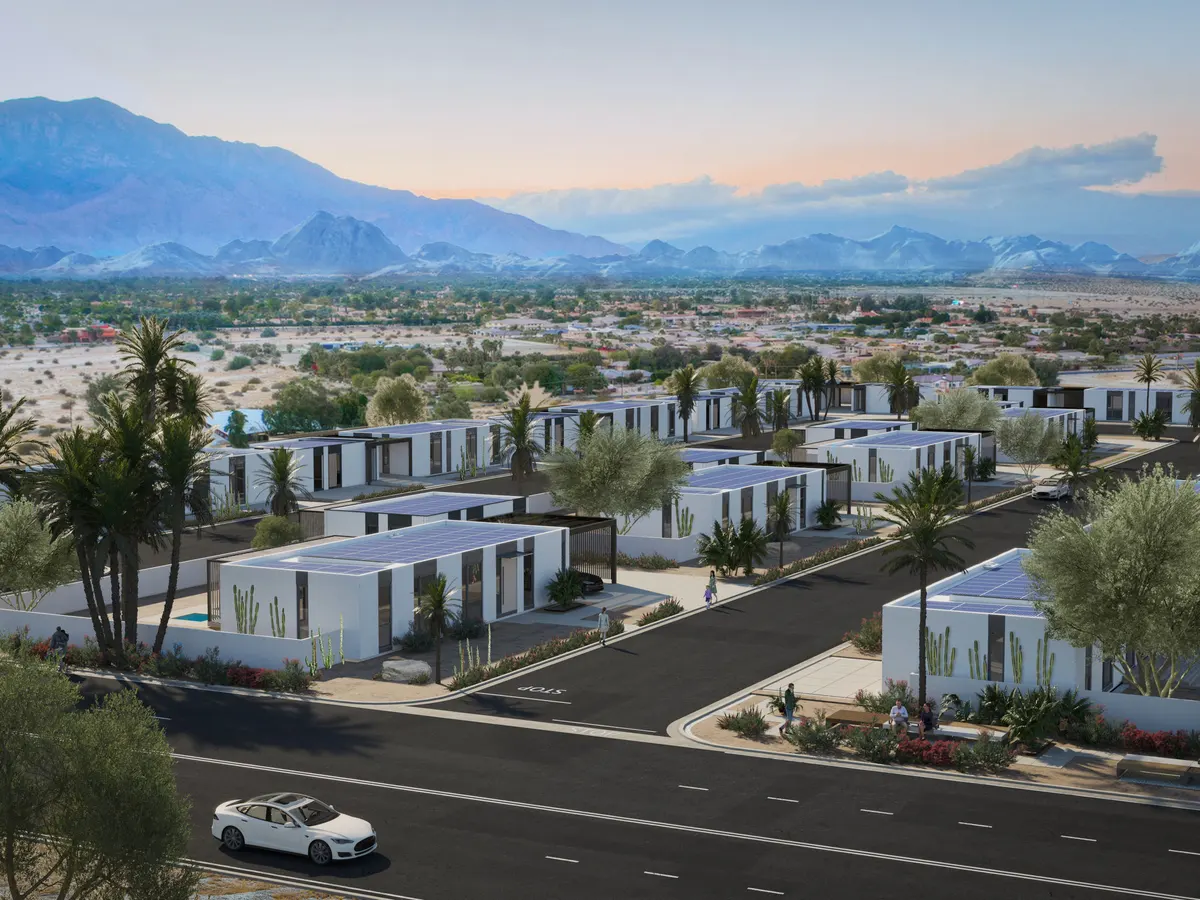 Rancho Mirage in California's Coachella Valley is slated to become the first 3D-printed town in the United States. The 15-home development will be finished by the spring of 2022 on a 5-acre site. Stone composite material will be used to build the 3D homes. The houses are built by putting together a succession of inner and external walls, the same way Lego pieces are put together.

This will be achieved by collaborating with mighty building companies, which are the pioneers in the use of extrusion-based 3D printing technology. Dupont's Corian acrylic polymer, which is used to produce counters and benchtops, is described as having stone-like minerals. The material is unique in that it may harden nearly instantly after UV post-curing while maintaining cohesiveness with the surrounding layers. 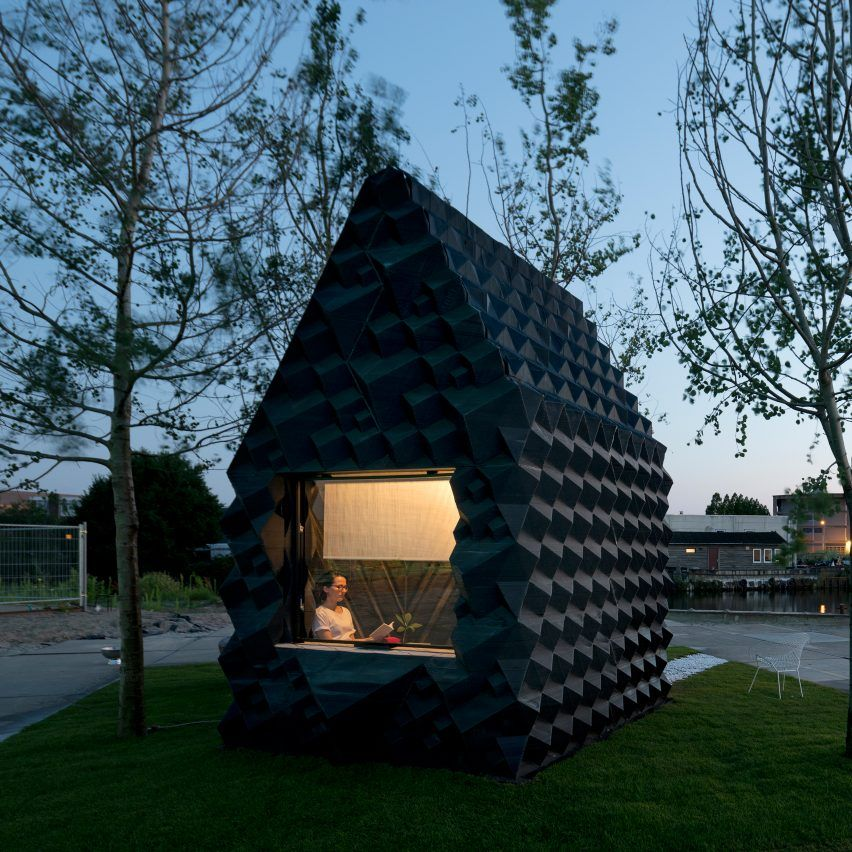 The Urban Cabin in Amsterdam is part of DUS architects' 3D designing and Print Living Lab. It is a perfect example of another step in developing sustainable, customized, and on-demand housing options for the world's fast-growing cities using in-house created 3D print technology. The 8 m2 x 25 m3 house is part of the ‘tiny house movement, in which small living spaces are used to tackle huge housing problems.

The urban cabin comprises a mini-porch and a living area with a sofa that can be used as a twin bed. Urban cabins have been projected to be most useful as Small temporary homes or where catastrophe befalls a region. The bio print material can be completely shredded after usage and re-printed into new designs, thus maintaining the spirit of using environmentally friendly material. 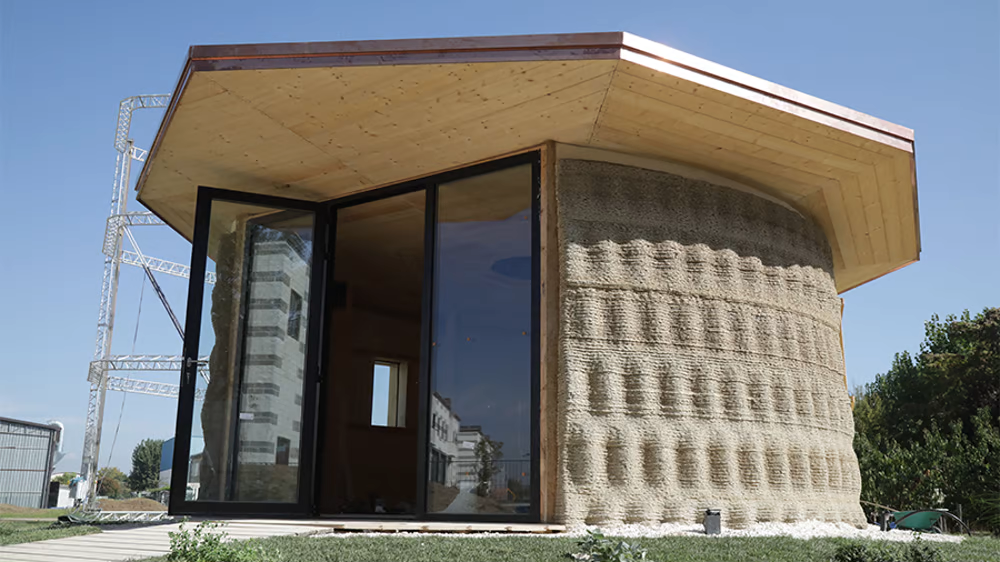 Gaia gets its name from the raw soil used as the main binder in the constituent mixture. It can be thought of as a new eco-sustainable architectural model that focuses on using natural waste materials derived from the rice production chain and is geared toward the production of bioclimatic and healthy masonry. Gaia is an excellent method for constructing low-cost homes, and its design eliminates the need for heating and cooling systems throughout the year. 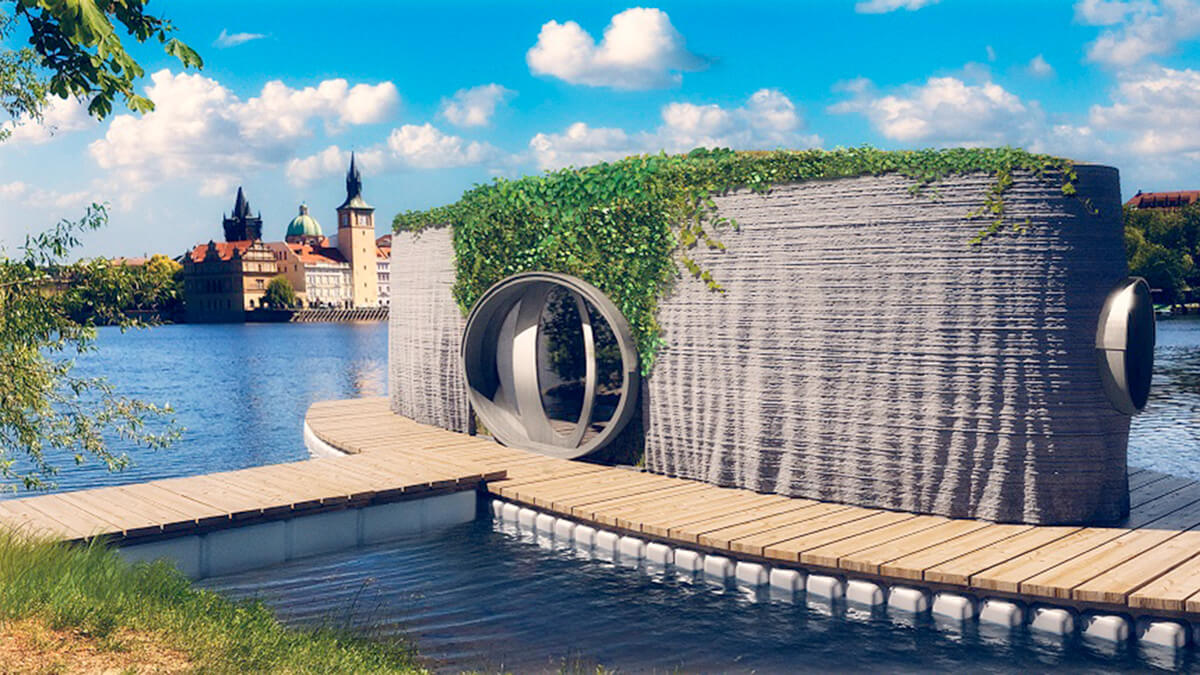 In české Budejovice, the Czech Republic, the first Czech 3D-printed floating home, Prvok od Buinky (Protozoon by Buinka), was 3D printed using concrete. The home was inspired by the shape of microscopic organisms called protozoa. It was designed by artist Michal Trpák and architects Ji Vele and Katerina Nováková in conjunction with many experts and partners.

Prvok, which can be built in 48 hours, saves up to 50% on building expenses and significantly decreases CO2 emissions and waste. On top of that, the house was built using eco-friendly materials, making it somewhat self-sufficient. 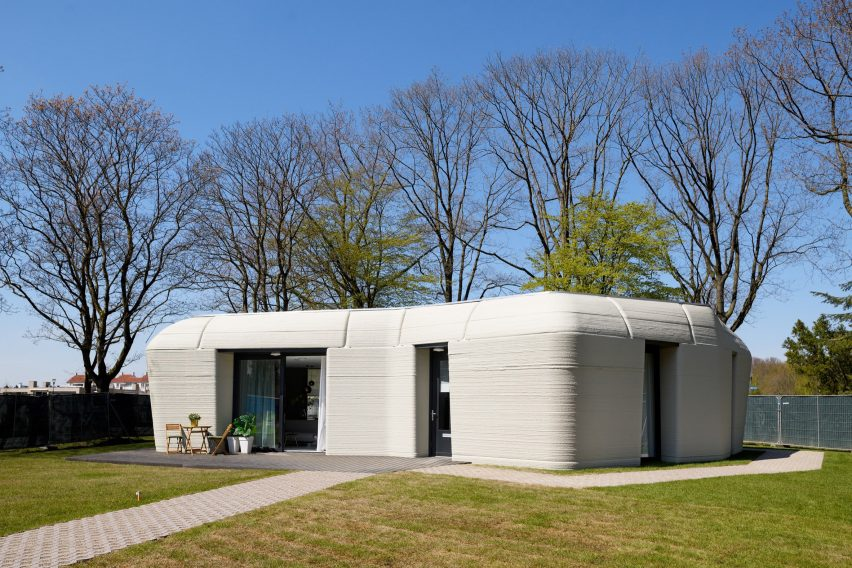 Just as the name suggests, Project Milestone, for various reasons, is truly a milestone. Not just in terms of technology and builders, but also in terms of design, local government, future occupants, and landlords. The boulder-shaped residence was the first lived-in 3D printed home in Europe. It was built as part of a project to create the world's first 3D-printed houses used as rental properties.

Simply put, 3D printed concrete is a specific concrete mix that has been properly prepared to flow freely through the printing nozzle. The foundations of 3D printed concrete constructions are stacked, with each layer deposited on top of a previous layer of pumped concrete. This process is repeated until the desired structure appears. One of the key advantages of 3D concrete printing is the capacity of the concrete printer to lay concrete exactly where it is productively required.

Poured concrete is often dense and includes far more concrete than is required for structural purposes. More cement is being utilized, which causes CO2 emissions since cement production emits a lot of greenhouse gas.

Lastly, traditional concrete is pretty stiff, but 3D concrete printing allows for more flexibility. This can be seen in the project Milestone, where the flexibility of form has been exploited to create a design in which the dwellings fit in organically, like stones, with their forested environment, as though the five buildings have always been abandoned in this forested sanctuary. 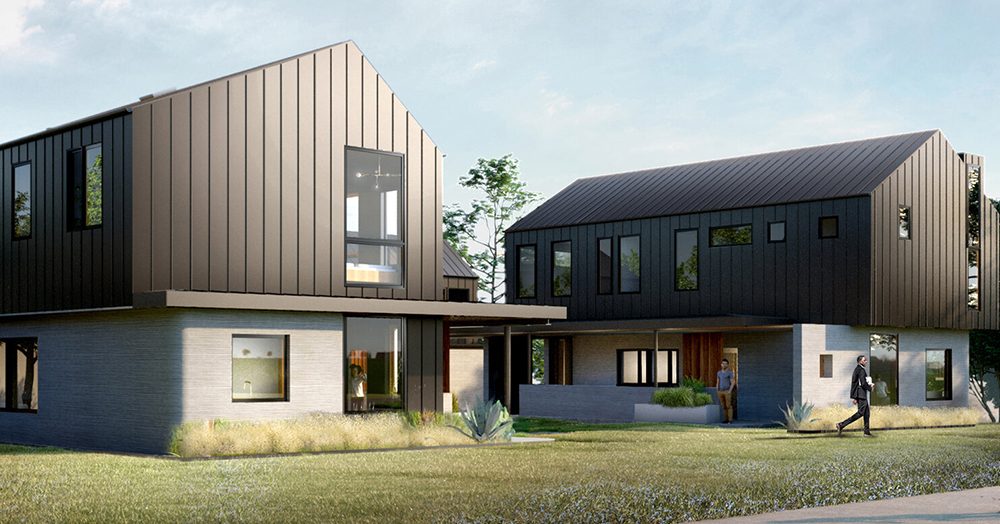 The East 17th residence project, located in the heart of East Austin, comprises four distinctive houses created using ICON's patented 3D printing construction technology and sophisticated materials that last longer than standard building materials. ICON teamed up with house developer 3Strands to create four 3D printed dwellings that are built to endure harsh weather. Aside from their resistance to severe weather, the constructions were printed in seven days and featured a range of two-, three-, and four-bedroom homes.

The Vulcan building technique, which utilizes a robotic armature to layer the Portland-cement-based substance Lavacrete into striated surfaces, is used to build the ground-floor walls of the four homes. 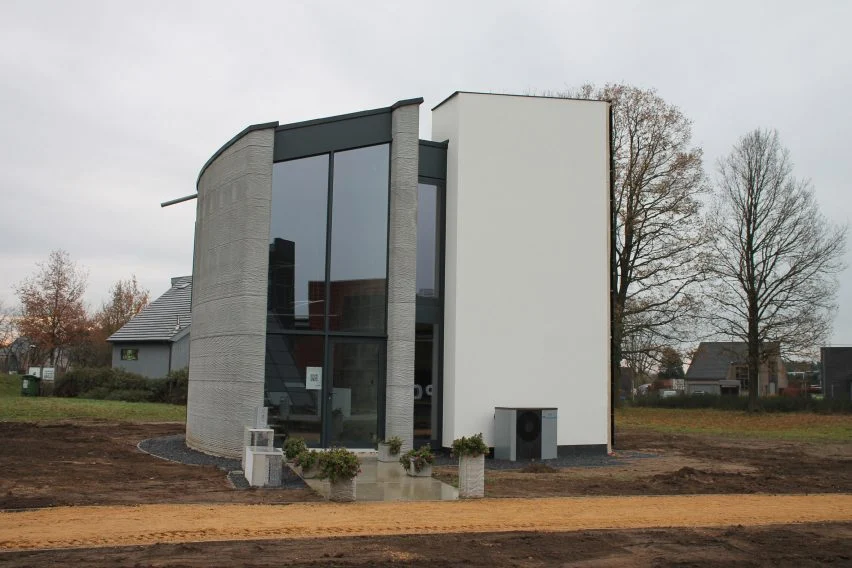 A two-story house building in Belgium completed by Kamp C

In Westerlo, Belgium, Kamp C, a center for sustainability and innovation in building, claims to have created the world's first 3D printed house in one piece. The house, which has two stories and was created on-site in just three weeks, was printed on Europe's biggest 3D concrete printer.

The fact that Kamp C printed this house with a fixed 3D concrete printer makes it truly unique and a giant leap in the use of 3D printers in construction.

3D printing technology is undoubtedly already gaining popularity among designers, architects, and construction companies, all in pursuit of saving cost, time and using environmentally friendly materials. Many options are already being implemented, such as printing temporary housing, specific building components, and even entire residences. The future promises to be full of innovative and groundbreaking 3D-printed homes.